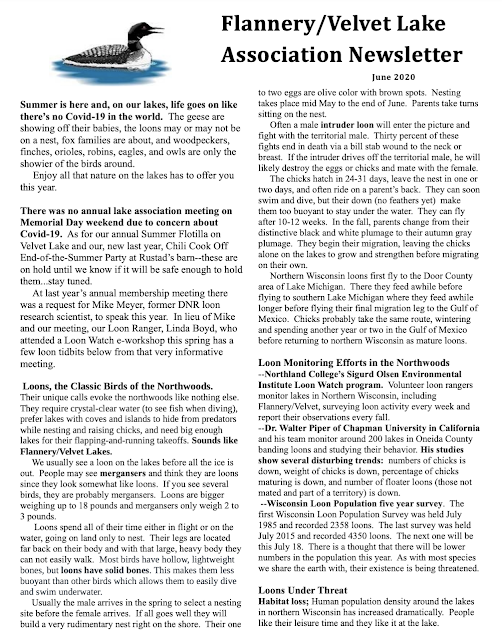 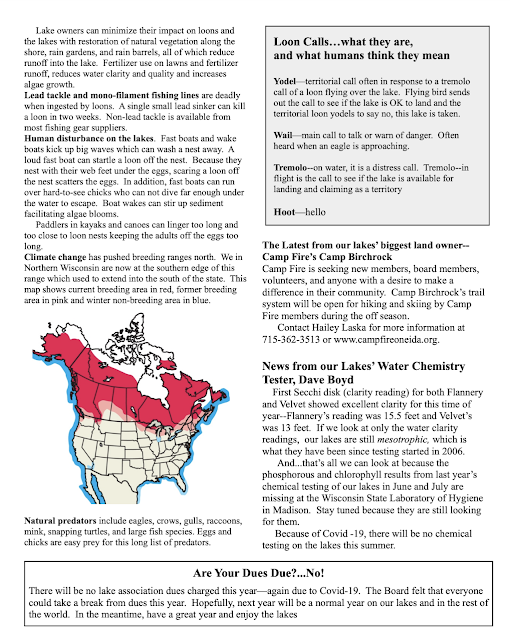 Due to current, multiple orders in the state of Wisconsin about social distancing, not being able to gather groups of people, and staying safe at home, we are not able to have our 2020 Velvet/Flannery Lake Annual Meeting in person. It was decided as a Board to not have a meeting at this time.

We hope to have some of the annual social events later in the summer and will provide updates on those as more information is available. Until then, hoping everyone stays safe and healthy!
at 8:46 AM No comments:

Once again, we'll be serving coffee and donuts
In addition to FVLA annual issues (committee updates, election of board members, news and concerns of the lakes), we will have a DNR speaker discussing the lower clarity readings on our lakes—what's going on???

We will also set the date for our annual Pontoon Party
You must be present and be a lake association member to vote on any issues. Single membership (one vote) is $25. Family membership (2 votes) is $50. You can pay your dues at the door.

Don't miss out on fresh coffee, donuts, and the latest lake information...Plus, meet your neighbors!
at 4:24 AM 1 comment:

The 2018 annual meeting was a success! A couple of quick updates from the meeting:

Velvet/Flannery Lake Directory -We are putting together a Flannery/Velvet Lake Directory that will be available to association members who have submitted the form. If you would like to be included in the directory, please use this short survey: https://goo.gl/forms/J1c1lDF1WpT2ZxWF2

Association Membership Dues - Reminder dues are $25 for a single membership and $50 for a family membership. Dues can be paid to the Flannery/Velvet Lake Association, P.O. Box 1582, Rhinelander, WI 54501

President Diane Jones called the meeting to order at 9 am at the Newbold Town Hall.  Nearly 20 people were in attendance.

Treasurer Dave Boyd reported a current treasury balance of $14,170.62 which includes dues and donations totaling $2325 and expenses of $3,553.58.  Expenses included $3,300 to Matt Berg for conducting our plant survey last August, batteries for the boat landing camera, expenses for copying and mailing postcard meeting notices and the newsletter, and coffee and donuts for our meetings.  J.R. Barttelt  moved to accept the treasurer's report, Linda Boyd seconded, and the motion passed.

Committee Reports
Plant Survey Report—J.R. Barttelt reported that our lake survey last year indicated that there were 24 native aquatic species in Flannery Lake, 21 aquatic species in Velvet Lake, and no aquatic invasive species in either lake.  One land species, yellow iris, was reported in the same area that the last survey, five years ago, found reed canary grass, but that the plant was located and removed by J.R. and the property owner shortly after the survey was completed last August.  The plant is and looks like a yellow iris and blooms in June, so be on the look out for it on land this June.  Matt Berg gave our lakes high marks for their water quality and the degree of protection of the water quality that residents are practicing.  Those practices include: keeping a buffer zone of natural vegetation between the lake shore and lawns, using rain gardens to catch water run off, bagging lawn clippings, and not using fertilizer or at least using phosphorous-free fertilizer.

Water Quality Report—Dave Boyd, who does the chemical water testing of our lakes reported that he was able to do the testing within two weeks of ice out this year.
Clarity—this early testing resulted in a secchi disk reading of 10 feet in both lakes.  The secchi disk is used to measure water clarity by indicating how deep into the water the secci disk can be seen.  This reading indicated a dramatic change from our usual readings of 16-18 feet deep and is due to the fact that the waters are turning over after ice off and thus, are stirred up.  When the turnover is complete, we can expect deeper clarity readings.
Water temperatures were 63 degrees at the surface of Flannery and 43 at the bottom of Flannery with a thermocline at about eight feet.  Water temperatures in Velvet Lake were 63 at the surface and 55 degrees below the thermocline.
Phosphorous levels last year were low in both lakes—9.8 mc/lt in Flannery and 12.5 mc/lt in Velvet Lake.  At levels above 20 mc/lt algae blooms can begin.
Chlorophyll levels last year were 3.6 mc/lt for Flannery and 5.1mc/lt in Velvet Lake.  7.9 mc/lt is the average reading for our region.
Lake Classification--Because of these readings, both our lakes are considered mesotrophic which is defined as moderately clear water but having an increasing chance of low dissolved oxygen in deep water in the summer.
A question was raised as to whether old septic systems on the lake might be an issue in our water quality.  Dave said that when properties are sold they have to meet current septic standards and per Oneida County Private Onsite Wastewater Treatment Systems Ordinance section 13.53-- “an existing system inspection is required for all property transfers in which a real estate transfer fee is collected.” So, although there may be inadequate septic systems in existence on our lakes, eventually most will be covered by these provisions for land transfer inspections.
History—Mike Barber said he will revive the history committee and will contact several people on the lake who have history knowledge and information.

Loons-Loon Ranger Linda Boyd reported that two loons have been seen peacefully feeding on the lake but have not nested as yet.  Others have reported seeing three loons, so if the pair does nest, we have an intruder loon possibility.  Stay tuned.

Old Business
Fish Cribs—Elizabeth Alderton contacted the DNR about using fish sticks and said the DNR does not want them used.  They are a man-made material and the DNR prefers natural materials, and suggests we let the trees that fall on the shoreline remain there to form natural cribs to shelter fish.

Bladder wort—Elizabeth Alderton contacted the DNR about our bladderwort situation and their position is unchanged.  We can do nothing about it except remove a 30-foot portion of it when it impacts our shorelines.

Lake Residents Directory—Elizabeth Alderton is compiling a directory of area lake residents with information on their address, phone numbers, etc.  We will send out the form via e mail again and, once completed, Elizabeth will send the directory document to people via e mail.  For more information or to receive a form to fill out, contact Elizabeth at aldertone@uwosh.edu

2018 Pontoon Party Date—Saturday, July 21, at 5 pm will be the time for our next Pontoon Party.  As usual, the party will dock at Mike Barber's pier at the south end of Velvet Lake. A boat is not required to attend this party.  Mike has a big parking lot at his house located at 3779 Velvet Lake Road, so come by land or by sea.  In case of rain, the party will be at Rick Rustad's pole barn at 4154 Flannery Lake Road.  If you are unsure about the weather and location of the party, call Mike at 715-282-6079.
As always, bring your favorite beverage and an appetizer to pass.
WWW.flanneryvelvetlake.blogspot.com is our website.  If you want information on our lakes and association, log on to that site.  If you want to put something up, contact Elizabeth Alderton at aldertone@uwosh.edu.
Information and news about our lakes is also available for Facebook users at Flannery/Velvet Lake Association.

New Business
floating logs—people have reported seeing partially submerged logs and a section of a pier floating in Flannery Lake, so take care when boating.

Camera—JR Barttelt reported that the camera that monitors our boat landing is no longer operational.  The board will replace it and look into solar power to help power the batteries.

Election of Board Members--Todd Dessain was elected and Dave Boyd and Lou Wilhelm were re-elected to the Flannery/Velvet Lakes Association Board.  J.R. Barttelt did not run for re-election and was thanked for his 15 years of work and involvement in the lake association.

President Diane Jones called the meeting to order at 8 am.

Treasurer's report:  Current balance of $14,170.62 includes dues and donations totaling $2325 and expenses of $3,553.58.  Expenses included $3,300 to Matt Berg for conducting our plant survey last August, batteries for the boat landing camera, expenses for copying and mailing postcard meeting notices and the newsletter, and coffee and donuts for our meetings.  Mike Barber moved to accept the treasurer's report, Dale Larson, seconded, and the motion passed.

New Business
Boat Landing Camera—J.R. Barttelt reported that our camera is not longer working so we need to decide if we want to continue the camera surveillance of the boat landing or not.  After discussion it was decided that we would buy a new camera and continue surveillance of boat landing activity.  Mike Barber will research what type of camera to use and will monitor the photos if and when there is a need to check on boat landing activity.  Elizabeth Alderton moved that the board allocate up to $250 for the purchase of a new camera for this purpose.  Lou Wilhelm seconded, and the motion carried.  Further discussion suggested that solar panels might help with battery power for the camera.

Old Business
Bladderwort—Elizabeth Alderton spoke with the DNR about our bladderwort situation.  The DNR sees no way to remove it and  would not allow pesticide treatment of the lake. So, people can only remove a 30 foot wide swath from their lake shore.
Fish sticks—Elizabeth Alderton spoke with the DNR about methods to increase our fish population and said the DNR does not want people to use fish sticks, which are not made of natural materials, and prefer that downed trees along the shore be left in place to become shelters for fish.
Lake Association Directory—Elizabeth Alderton is compiling a directory of contact information on lake residents.  We will send out another request for information for the directory and then distribute it via email.

Meeting was recessed in order to hold the annual lake association membership meeting.   After the membership meeting the board reconvened with newly elected board member Todd Dessain and reelected members Dave Boyd and Lou Wilhelm.
The Board elected officers as follows:

Meeting adjourned at 11 am.